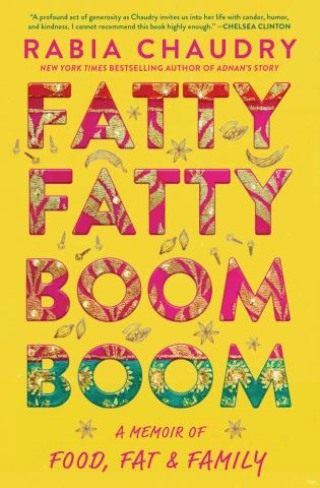 A Memoir of Food, Fat, and Family

“A delicious and mouthwatering book about food and family, the complicated love for both, and how that shapes us into who we are . . . I absolutely loved it!”
—Valerie Bertinelli

From the bestselling author and host of the wildly popular Undisclosed podcast, a warm, intimate memoir about food, body image, and growing up in a loving but sometimes oppressively concerned Pakistani immigrant family.

"My entire life I have been less fat and more fat, but never not fat." According to family lore, when Rabia Chaudry’s family returned to Pakistan for their first visit since moving to the United States, two-year-old Rabia was more than just a pudgy toddler. Dada Abu, her fit and sprightly grandfather, attempted to pick her up but had to put her straight back down, demanding of Chaudry’s mother: “What have you done to her?” The answer was two full bottles of half-and-half per day, frozen butter sticks to gnaw on, and lots and lots of American processed foods.

And yet, despite her parents plying her with all the wrong foods as they discovered Burger King and Dairy Queen, they were highly concerned for the future for their large-sized daughter. How would she ever find a suitable husband? There was merciless teasing by uncles, cousins, and kids at school, but Chaudry always loved food too much to hold a grudge against it. Soon she would leave behind fast food and come to love the Pakistani foods of her heritage, learning to cook them with wholesome ingredients and eat them in moderation. At once a love letter (with recipes) to fresh roti, chaat, chicken biryani, ghee, pakoras, shorba, parathay and an often hilarious dissection of life in a Muslim immigrant family, Fatty Fatty Boom Boom is also a searingly honest portrait of a woman grappling with a body that gets the job done but that refuses to meet the expectations of others.

Chaudry's memoir offers readers a relatable and powerful voice on the controversial topic of body image, one that dispenses with the politics and gets to what every woman who has ever struggled with weight will relate to.

Rabia Chaudry: Rabia Chaudry is an attorney, advocate, podcaster, and executive producer of the four-part HBO documentary, The Case Against Adnan Syed, which was based on her New York Times bestselling book, Adnan's Story. Chaudry is also co-producer and co-host of three podcasts, Undisclosed (360 million downloads), The 45th (four million downloads) and the new The Hidden Djinn. A 2021 Aspen Institute/ADL Civil Society Fellow and a 2016 Aspen Ideas Scholar, she serves on the Vanguard Board at the Aspen Institute. She is a Fellow of the Truman National Security Project, a Fellow of the American Muslim Civic Leadership Institute, a Fellow of the Shalom Hartman Institute, and a founding board member of the Inter-Jewish Muslim Alliance and the Muslim Jewish Advisory Council, both of which focus on building Muslim-Jewish coalitions around pressing policy issues and educating across communities to break barriers.